For months, I have been looking forward to Jackie Sobon's new book, Vegan Bowl Attack!: More Than 100 One-Dish Meals Packed with Plant-Based Power.  So imagine my thrill when an early copy arrived from the publisher!  This book is right up my alley, filled with one-dish meals that are beautiful and fun to make while soooo satisfying to eat!  It's available in stores now, including in the Beautiful Ingredient Bookstore and at the bottom of this page.

Jackie is the founder of Vegan Yack Attack, a fun vegan food blog she started several years ago with a desire to maintain a sustainable lifestyle after learning of the negative impact factory farming and chemicals found in food, beauty, and household products have on our environment.  She's an inspiration and I'm so happy for her as she launches this cookbook.

Loaded Potato Breakfast Bowl is my new favorite recipe.  "Loaded" is right:  this recipe, with or without vegan cheese, is loaded with creamy, flavorful goodness.  It's warm and cozy, so I have this earmarked to make often in the fall and winter - though we are appreciating it's comfort on a summer morning, too!  Who am I kidding - we've eaten this at all times of day.  Jackie nails the gravy in this recipe - I want it all day, every day.  The arugula provides a bright, lemony flavor that feels appropriate for this time of year, and using fresh summer tomatoes elevates it, too.

A few notes on this recipe:

The recipe provides a generous amount for 4 servings.  Mmmmm.

Tip:  It helps to read the whole recipe before starting.

METHOD
TO MAKE THE POTATO HASH:
Melt the coconut oil in a large pan over medium-high heat. When the pan is hot enough to make water sizzle, put the potatoes in. Cover and cook for 15 minutes, stirring occasionally. (Start your gravy now, if you can.) Add the onions to the potatoes, cover, and sauté until the onions become translucent. Lower the heat to medium and then add the tomatoes and bell pepper to the pan. Leave uncovered and sauté until the potatoes are crispy and cooked all the way through.
Season the hash with salt and pepper. Wait until right before serving to fold in the arugula, so that it does not become too limp.
METHOD
TO MAKE THE MUSHROOM GRAVY:
Make the gravy at the same time as the potatoes if you can; I wouldn’t recommend doing it afterward, as the potatoes may get mushy when reheated. Coat a medium saucepan with 1 tablespoon (15 ml) of the coconut milk. Bring to a simmer over medium heat. Next, add the onion and sauté for 2 minutes and then stir in the garlic. Cook until the onions are almost translucent and then add the mushrooms. Sauté until the mushrooms have darkened and reduced in size. Sprinkle the cornstarch over the onion-mushroom mixture and stir until everything is coated evenly. Put the contents of the saucepan in a blender or food processor along with the remaining coconut milk, the nutritional yeast, and liquid aminos and pulse a few times for a smoother consistency.
Pour the gravy back into the saucepan and bring to a boil. Lower the heat so that the gravy simmers. Stir or whisk every couple of minutes until it reaches the desired thickness and then season with pepper.
Divide the potato hash among 4 bowls (don’t forget to fold in the arugula first!) and top with cheese shreds, if using, and the gravy. Serve immediately.

Pick up your copy at your local bookstore, or online here: 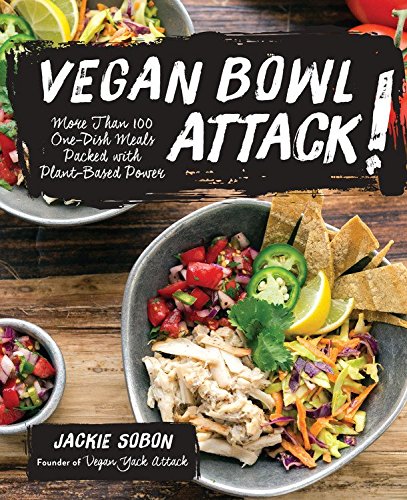 Next from the Book

The next recipe on my list to try from Vegan Bowl Attack!?  Nectarine Quinoa Porridge!  With nectarines currently in season, I can't wait to make this.  It includes my all-time favorite nut:  pistachio!  I don't think I can wait until tomorrow morning...