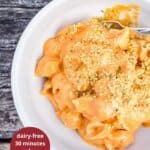 with the cheesiest cheese sauce

Creamy vegan shells and cheese that are wonderful on their own or in a burger! This is the second of a seven-part post series for Dustin Harder’s new cookbook, Epic Vegan: Wild and Over-the-Top Plant-based Recipes. The idea behind this awesome book: Dustin takes a collection of tasty recipes and puts them together to make one epic creation - and it’s all vegan! Dairy-free, quick enough to have ready in 30 minutes (with a baked option) and gluten-free option.

recipe 2 of 7: Vegan Shells and Cheese

Today, we are focusing on the mac and cheese part, with actually two recipes from the book: Cheesiest Cheese Sauce and Easy Creamy Shells and Cheese. It is just what it sounds, super creamy and this recipe makes a nice big batch. I had never tried using sauerkraut in a cheese sauce until now, and while it might sound strange, it actually adds a little pleasant tanginess that helps balance the other ingredients - genius! There are a lot of veggies in this sauce, so it’s a nutritious winner for the whole family.

More recipes in the series 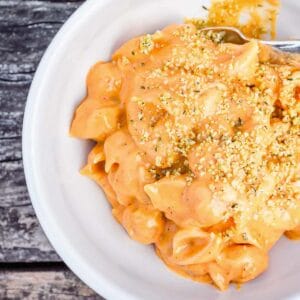 Easy Creamy shells and Cheese with The Cheesiest Cheese Sauce

Author’s note: I once was a close contender for a spot on the Food Network’s show The Great Food Truck Race. If chosen to compete, I knew I wouldn’t be able to rely on things like nutritional yeast and miso, which can be challenging to find sometimes. I set forth to create a cheese sauce with ingredients I knew I could find anywhere in the country so I could effectively compete in any given situation, and that’s when I got obsessive about creating this recipe. It’s so versatile; I hope you love it as much as I do! Tip: I prefer kabocha squash, as it is slightly richer in flavor and color, but if you can find only butternut squash, that works as well - and you can sometimes find it already peeled and cubed in the grocery store! Mac and Cheese: This recipe comes together in a cinch. While your pasta is cooking, whip up the cheese sauce. Crunch up potato chips for an extra-fun crust on top.