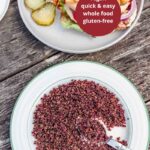 This quinoa bacon bits recipe is a satisfying, nutritious alternative to the meat version. This is the third of six recipes that create one epic seventh recipe, from Dustin Harder’s new cookbook, Epic Vegan: Wild and Over-the-Top Plant-based Recipes. This recipe is quick, easy, vegan, gluten-free, and can be made in 30 minutes or less.

Ok, so for the third recipe in the Epic Vegan Bacon Mac and Cheese BBQ Blue Burger series, we have Quinoa Bacon Bits! While I won’t say these are exactly like the bacon bits you might be used to, they add a nice, satisfying saltiness and texture to just about anything - and it’s quinoa, not bacon. I choose the quinoa! I used red quinoa so that it had that bacon-y color.

You can use a stainless pan instead of nonstick (I don’t own nonstick), and I do want to say that it really is key to leave it cooking for the three minutes undisturbed before flipping and stirring. This is one of those recipes you’ll likely want to keep in your fridge on the regular - a delicious way to eat this nutritious seed.

While technically you could use any quinoa, I prefer using the red so that the color goes with the theme.

The flavors are created with soy sauce, ketchup, and smoked paprika.

Olive oil is used to help keep the quinoa from sticking to the pan. If you prefer not to use oil, skip it and make sure the pan is well heated before adding the quinoa mixture.

The recipe figures that you have the quinoa cooked and ready to go beforehand, so make sure you allow extra time for that if you don't have any cooked on-hand. 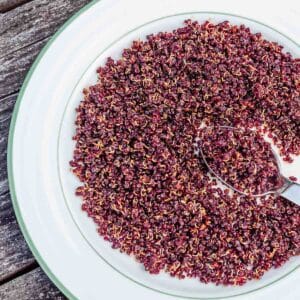 Author’s Note: BACON! Even vegans are obsessed with it. Because I enjoy smoky flavors in my meals, I created these bacon bits particularly for the Loaded Baked Potato Soup on page 140, but you will find use for them in several other recipes in this book! I also like to have them on hand to sprinkle over salads, soups, or even in sandwiches. Tip: The quinoa will not necessarily crisp up when in the skillet; you might luck out and get some crispy pieces, but the purpose of this step is to dry out the quinoa a bit and release some of the robust flavors.
Tried this recipe?I'd love to see! On Instagram, mention @beautifulingredient and tag #beautifulingredient!