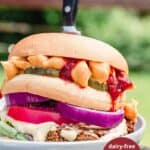 This is the epic vegan burger recipe from Dustin Harder’s new cookbook, Epic Vegan: Wild and Over-the-Top Plant-based Recipes. It's the Bacon Macaroni and Cheese BBQ Blue Burger and it is meatless, dairy-free, vegan, gluten-free, and over-the-top delicious! Six recipes come together to make this epic burger! Links to all can be found below.

This recipe is based on having all the ingredients ready to go and is really all about the assembly, with all six recipes involved made in advance. I typically make everything but the pasta shells and burgers in advance, so that the hot stuff is hot and it’s not too much work to put together at one time. I really don’t recommend trying to make all the recipes the same day unless you’d really like some hours in the kitchen. I’ve provided time estimates below for both of the above easier options.

It’s fun serving these epic burgers and watching people’s faces as they receive them. And then watching them try to eat them! The flavor combination is so worth the effort. Get messy and enjoy! 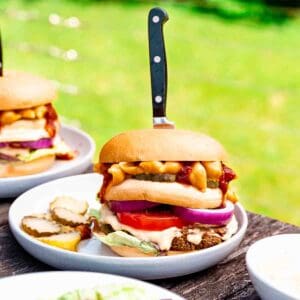 Author’s note: You don’t have to go to a silly chain restaurant to have a burger that’s taller than your pint of beer; I’ve got you covered! Don’t be discouraged by the make-ahead items in this recipe; I encourage you to go for it and make them all from scratch because it’s super rewarding. Make the Easy Creamy Shells and Cheese for dinner one night, then use the leftovers for this sandwich to get the most use of the Mac recipe (and also be prepared)! I also applaud you if you want to go out and buy items at the store—there’s no shame in that game. The end result is just as enjoyable, no matter if you build it from the ground up or rely on some readymade vegan products. Tip: There are vegan macaroni and cheese brands available for purchase in stores these days, which make it so much easier to tackle this recipe epic style. Take it a step further and purchase your burgers from astore as well and you are halfway to epic already! To make some quick strips of veggie bacon at home, use a vegetable peeler to create thin strips of carrot. Fry them in a little oil over medium heat in a skillet until desired doneness. The sides will get dark and curl up like bacon. Sprinkle with some smoked sea salt for that extra touch!
Tried this recipe?I'd love to see! On Instagram, mention @beautifulingredient and tag #beautifulingredient!